“In 1991, after having experimentally interfaced my acoustic violin with a variable speed video cassette player, I bought a MIDI violin and a Pioneer Disk Player. Interfacing these instruments with a computer gave me an instant access to any frame of video on the disk as well as access to fast/slow and forward/backward movements. The initial software was written by Russ Gritzo and further developed and improved by Bill Heckel. Violin Power is a ongoing continuous project with an ever increasing ‘repertoire.’ So far I have made five videodisks and I change the program for every performance.”— Steina 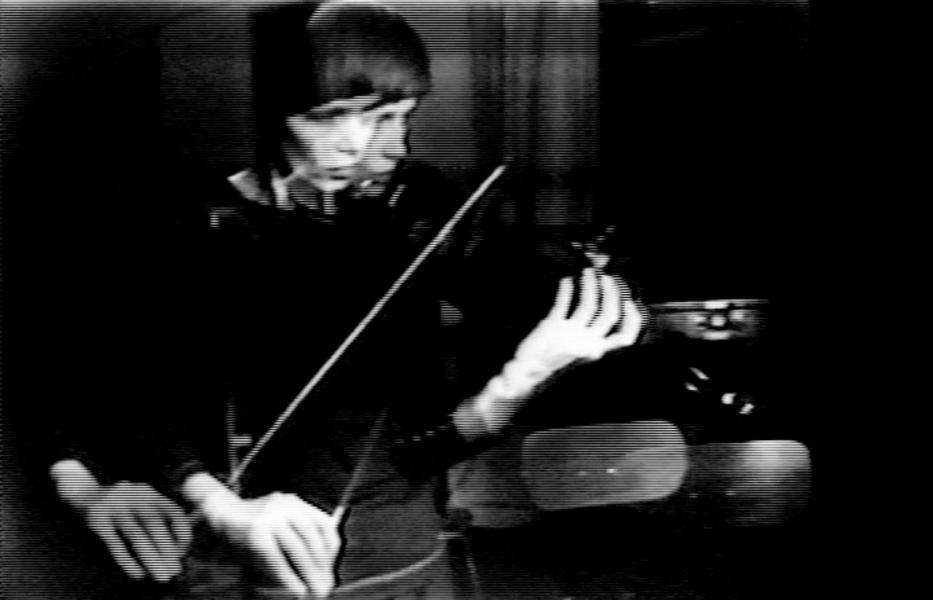 The Violin Power project, re-articulated always with a violin and live image processing, but with different control devices and different footage over its 30 year lifetime, was born during the time the Vasulkas lived and worked in Buffalo, from 1973-1980.

I first encountered the Vasulkas’ insistence on dialoguing with tools as a graduate student in the Vasulkas’ classroom at UB’s Center for Media Study in the early 1980s. Seeing a tape of Steina’s 1978 analog performance of Violin Power at that time functioned as a true epiphany for me. I’d been struggling for weeks to understand the big picture - of how these artists like the Vasulkas were approaching the medium of video that, up to that point, I had only associated with camera-based representation.

In a 2003 interview, Steina described the period 1973-1980: “At that time, I was very deeply steeped in experimentation, where the idea was not to have a preconceived idea, but rather work with a kind of “what if” attitude…meaning what happens if you patch this tool that way, instead of this way. It was kind of an endless exploration and though you always have to start with some idea, it was very important to not let the idea interfere with your exploration…There is a danger in being infatuated with an idea and then trying to impose it upon the material. Fortunately the material has a way of confronting you with—‘This is not very interesting but let me show you something that is.’”

One might see Steina’s early history as a classically trained violinist reflected in her initial selection of the violin as an instrument to interface live with cameras, oscillators, and various hand-built tools. In Steina’s work of the mid 70s that includes both Violin Power and a second corpus of work called Machine Vision, there is a musical sensibility to the phrases or displays of multi-channel or rapidly switched video images that can suggest a string quartet’s polyphonic structures.

Work from this period often features luminance keyers that function like a stack of electronic stencils in motion, combining multiple channels of recorded or live images in legible but unanticipated ways, and that results in a structural complexity that, for me, brings to mind Bach fugues. Steina’s keying devices are fed by cameras that might be latched to turntables, or poised on long rotating arms while directed at mirrored spheres.

These Machine Vision investigations independently observe the surrounding environment, whether the modest but absorbing Vasulka studio, or an expansive southwestern landscape populated by giant satellite dishes as in The West, an early 80s project.

Woody Vasulka has said about Steina’s work of this period: “ For her, the instruments are the performers. She always used more instruments than I ever did.” Violin Power in its recurring incarnations always references a relationship between image and musical structure. It also points to what was for many artists of the late 60s/early 70s, including Steina and Woody Vasulka, a fundamental grounding in the electronic materials of the video medium. While the Vasulkas employed cameras sometimes, and mainly to sample the surrounding environment, their work, again like much media work with roots in the late 60s, has been largely non-narrative. Woody has commented: “All our works are linear, in the form of demos, bringing certain artifacts or phenomenologies out.”

One of the early fascinations in working with video for the Vasulkas was the manipulation of the electronic signal. The waveforms and voltages that produced the analog video image was essentially the same basic electronic material that produced sound, and this basic structural equivalence inspired investigations into re-routing signals—for example, patching sound signals into video circuits and vice versa. It also inspired investigations into the designing of customized tools to assist in the Vasulkas’ desired explorations of the electronic frame, machine perception, and control devices.

Steina and Woody candidly embraced their assorted instruments, and famously described their work as a “dialogue with the tools.” Woody said in an interview: “Both of our upbringings are socialist and concerned with knowledge. We were interested in the transmission of knowledge from one place to another: that was the mission of the time.” He went on to say: “The system is a participatory process in which tools give you abstract material. You're there maybe to form it, but the tool and you have the same significance. We always called what we were doing dialogues with the tools. Sometimes we said that the tools were our teachers.”

Seeing that 1978 version of Violin Power as an analog performance where the frequencies produced by the violin directly affected the oscillations and structure of the image finally translated weeks of watching demonstrations of waveform generators and other tools into an informed aesthetic experience that I could comprehend, and that deeply affected me on multiple registers. I was fortunate to again encounter Violin Power in the early 1990s performed at a media art and technology exhibition in Brno in the Czech Republic, shortly after Steina had shifted to using a new set of instruments for Violin Power-- a MIDI violin that accessed video images on a laser disk. Steina’s performance of new footage using a different array of digital controls was both familiar and at the same time completely exhilarating and new.

A short time later, still in the early-90s, I visited Steina and Woody at their home and studio in Santa Fe as part of the research I was doing as curator of an extensive collection of early video, Surveying the First Decade. I knew that the Vasulkas had maintained an important collection of work from that first decade and since—careful documentation of their own investigations with tools as well as the work of other artists with similar preoccupations; documentations of music, theater and performance scenes in New York in the late 60s; and interviews with many artists, tool designers and other collaborators over the years. The Vasulkas’ longtime colleague Gene Youngblood described their archive in a statement at the Daniel Langlois Foundation’s site that accompanies an online collection of Vasulka materials:

“There are larger collections than the Vasulkas’, though not many. What distinguishes this archive is the remarkable breadth of its technological and cultural purview. On one hand, it’s evidence of one of the most inspiring investigations into the nature of a medium in the history of any art form. At the same time, it documents a ferment of activity across a constellation of avant-garde art and culture. It’s a panoptic portrait of a society and an era… The Vasulkas brought a European respect for history and for intellectual traditions to the emerging electronic culture.”

About her experience in New York starting in the late 60s that inspired her early documentation efforts, Steina has said: " That was the times. It was everywhere, sharing equipment—mutual favors. And everybody was always sending you to meet someone you ought to meet because they could help you. New York was a very friendly place in those years and the idea of sharing and pooling and using instruments and hooking them together—it was all in the footprints. “ Woody has commented about that time in New York: “Video was undefined, free territory, no competition, a very free medium. The community was naïve, young, strong, cooperative, a welcoming tribe.”

During my early 90s visit the Vasulkas were deeply involved in two projects that involved cataloguing and resituating their own archives for new audiences—some eventually for online access, and in the case of Eigenwelt der Apparate-welt/ Pioneers of Electronic Art, for an exhibition of custom-made tools from the 60s and 70s, along with schematics and tapes made with these tools, that the Vasulkas were organizing for Ars Electronica festival in Austria. It seemed to me that the Vasulkas’ longtime dialogue with tools and commitment to sharing information was being exercised to respond to and educate a new generation. In Santa Fe in the early-90s, on the cusp of the new digital era, our conversations shifted between Woody’s investigation of digital file formats and internet bandwidth that would define the parameters of user interactivity for an online archive in the near future, and Steina’s encyclopedic memory of the events of the early video scenes and “tribes” in New York, and the first years of the Kitchen, which the Vasulkas had co-founded in 1971. All access to tapes and information were offered to me with a generosity of spirit that I had not experienced elsewhere in my research.

When I see a performance of Violin Power, I also see Steina the archivist, an artist who continues to re-perform video fragments and glimpses of earlier projects, re-engaged through new incarnations of Violin Power. I just mentioned that Steina and Woody were co-founders of the Kitchen in 1971, which, as many of you know, continues to serve New York artists and audiences as a site for experimentation and cutting edge work.

Woody has explained that they originally called the Kitchen an LATL, a “live audience testing laboratory,” a place where people could congregate and explore ideas in video, music, dance and performance with an audience that shared an appetite for such experimentation. Of early 1970s audiences in NYC writer and mediamaker Liza Bear has said: ”The heightened awareness of the audience was an intrinsic element of the whole performing situation.” In an interview Steina described the early years at the Kitchen: “It had a friendly atmosphere; the place itself had very good vibes. We usually welcomed everybody at the door. I sometimes joke that I lost interest in the Kitchen when I could no longer shake hands with every member of the audience.” …