PETR VÁLEK: Figments (and other stuff) 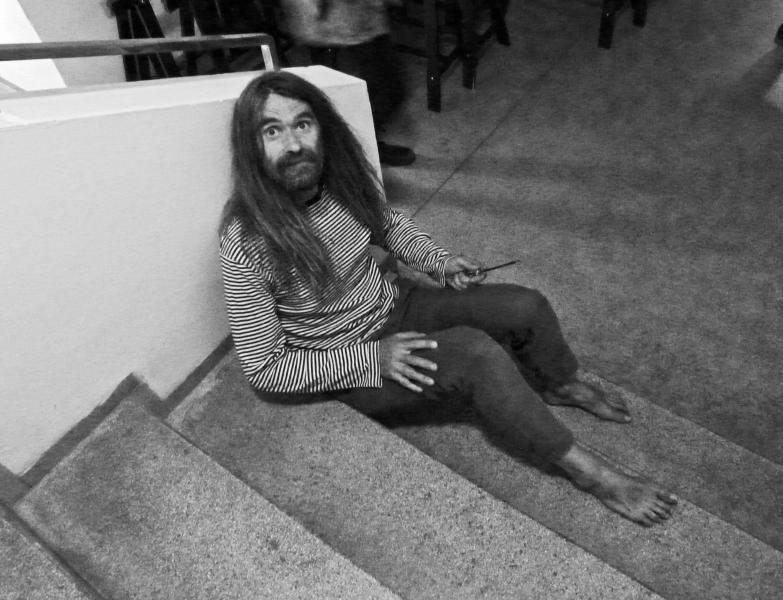 Petr Válek lives and works in Loučná nad Desnou in Hrubý Jeseník. This little town located in the former Sudetenland used to be called Vízmberk, or Wiesenberg. Renown pianist and poet Alfred Brendel was born in Wiesenberg in 1931. Petr Válek, born in 1976, trained as a stonemason and worked as a nurse in a home for the elderly. He currently lives as a practising artist. Since his childhood, Válek has worked vehemently on his creative activities, which include painting, drawing, book illustration, and music. Presently, he has begun to build (and deconstruct) mechanical and electro-mechanical musical instruments or self-propelled kinetic objects, constructed from found household items. He also performs as Der Marebrechst — a bizarre noise musician and crazy inventor, regularly publishing short "tutorial" videos recorded in his home studio, or in nature on Youtube or more recently on Facebook.

Although definitely not Válek’s first exhibition, Figments (and other stuff) is probably the first attempt to present the wide scope of his creativity and work. The ambience of Válek's studio, stacked with an assemblage of organically and chaotically placed books, drawings, tubes of paint, paintings (both hung and not), along with his computer — which he uses to animate his virtual travels through marvelous dreamy landscapes, the inspiration for which he finds in the deep forest hillsides of the Jeseníky — will be presented.

Produced through with the support of Bastl Instruments and in collaboraton with Dům umění města Brna a Polem performativního umění Terén.

A catalogue including a limited edition CD will be produced during the exhibition.

Special events, including podcasts, live streaming, and music performances will be announced soon.

We looking forward to greeting you in person or virtually at Vašulka Kitchen soon. 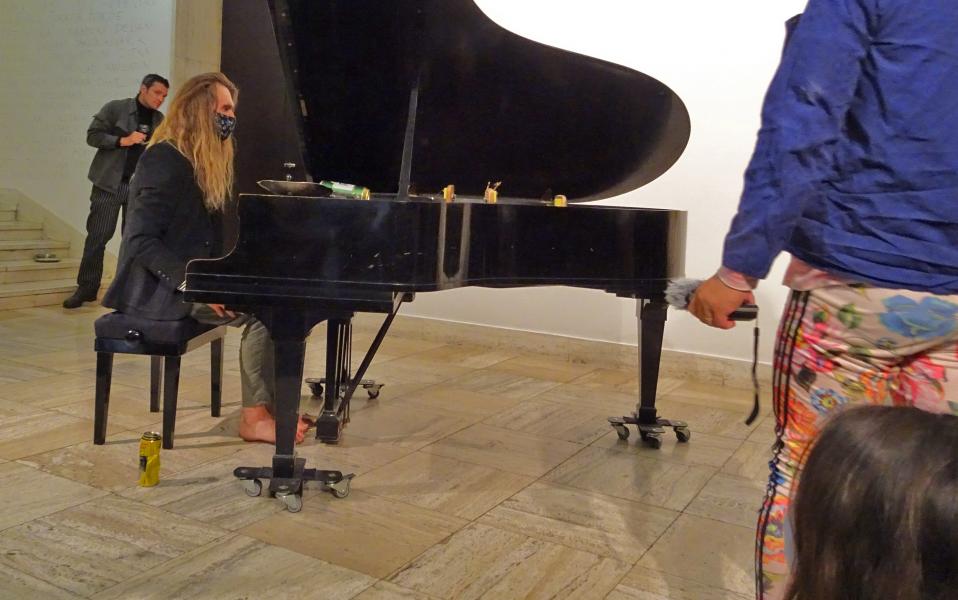 For many years, Petr Válek worked with sound in seclusion and only occasionally sent his home-made CDs to select people (such as me). They always came as a bundle of discs, as a collection of recordings born in a certain period. That may have been the reason why initially only a few people dared listen to at least one disc from that pile. But gradually, Válek (perhaps because there are not many other adepts of this genre in our country) was fortunately discovered as an original artist, later considered a classic of the "Outsider music" genre. The song, typical of most musicians graced with this label, is difficult to find in his work, and to reduce his work to an example of "raw music" is slightly unfair. By playing live, he naturally fit into the local noise scene which embraced him not just as an amusing eccentric, but also as an original, inspiring personality. In his work, the originally predominant noise and raw musique concrète sometimes break into silent passages composed of field recordings; when he is in the mood, he switches to underground compositions with raving synthesizers or to a nervous ambient. He reacted to the wave of madness around modular synthesizers in his own way: producing original musical instruments of which we sometimes have no idea whether and how they actually work. Or are they more of a cultural apparatus by which he comments the current trends, as in the case of the Silentizer? It has many buttons and controls, but the output is always the same: SILENCE.

Válek approaches sound from the perspective of the visual image, and image and sound are increasingly intertwined in his idiosyncratic poetics. As a musician, he wasn't satisfied with conventional instruments and devices, and transformed their form and function according to his own ideas. At first, for example, by repainting the surface, but he later interferes with their construction, mastering a peculiar style of hardware hacking and circuit bending which always reveals the inverse side of objects, showing the insides of devices and connecting their interfaces. Lately, he has been creating mobiles - kinetic sound apparatuses composed of small ”disturbances,” objects animated by small engines which move inside resonant vessels, or just across the table or floor, and make stochastic noise by hitting walls or crashing into each other.

Crumpled pots spin on prepared turntables, and pieces of boards, colanders, slicers, wires and springs are assembled with electronic devices. At the same time, Válek's musical set is always also a visual installation: he sometimes paints the instruments or incorporates "decorative" elements into them. Some objects lose their musical functionality completely, turning into bizarre, injured toys, generating vague and chaotic unrest. Even then, they do not cease to be an integral part of the sound performance.

An extraordinary discovery for me was Válek's performance art documented on video. His musical events, or acts, are performances sui generis. Lately, he sometimes completely leaves out musical instruments and devices, staging short, compact events in which he struggles with his surroundings and objects. My favorite piece is a video called Fat Man Balancing, where he tries to keep balance on two legs with a big cardboard box on his back. In The Outdoor Music Improvisation cycle, he punches young tree trunks in a grove, scratches the spruce bark with a stick, or beats two stones against one another. The result is always surprisingly engaging, and includes insight and poetry. He reflects on the recording media, using a vintage video camera which distorts the captured sound, and provides a remarkable dimension of rawness.

After a period of rejecting the Internet, Petr Válek found his space and functional platform there. His Youtube channel is a place where I return to and where I often send my students from the Department of Alternative Theater. Válek's Facebook profile is a resource of small pleasures not only for me, but for many admirers from around the world. Enthusiastically commenting on every new video adventure, Válek became a YouTube celebrity: he challenges the world with clips shot in the tiny garden studio full of old chairs, peeling enamel pots, broken speakers, artificial flowers and the wreckage of all kinds of musical instruments. From there, Petr moderates everything in the artificial language of instruction, or tutorials, reviews prototypes of musical instruments, and his videos abound in rare "pure humor without wit".

In an article I wrote in 2016 for A2 magazine, I compared Válek to a mysterious planet that has already been discovered and now needs to be explored. But perhaps Petr Válek is rather a different space object: perhaps a comet with an eccentric trajectory, perhaps a spaceship, assembled from planks and sheet metal and powered by energy of an unknown origin.

Petr Válek opened his current youtube channel at the end of 2017. Sure, it would be possible to use some algorithm to find out how many man-hours or man-days he already uploaded to the internet since then, but I am OK with the estimation: ALOT.

The piece iiiiiszcciiissz made in 2019 was viewed by 35,126 people, or robots and his chanel has 4.95K subscribers. The author records the videos himself from a tripod, from his hand, or are born digitally inside the PC.

Videos can be divided into several genres: the recordings of kinetic apparatuses in studio, fictional tutorials where Válek demonstrates his inventions and apparatuses, talking in a bizarre costumes to audience in a language reminiscent of a mashup of Spanish, Finnish and Esperanto, indoor performances, featuring him as a actor in old slapstics, capturing from expeditions into Jeseníky nature, sometimes with a noise tint, in recent times even subversively poetical and suprisingly quiet, animation studies of a movement through virtual-fractal 3D landscapes built in the Mandelbulber software.