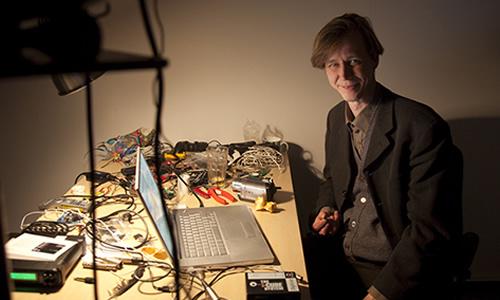 Haraldur Karlsson (b. 1967,Reykjavik) lives and works in Norway and is specialized in experimental video art for nearly 30 years. Between 1999 and 2009, Karlsson worked at the Icelandic Academy of Fine Arts as head of fine arts digital Media Lab. Karlsson is currently based in Oslo. He has had a number of  exhibitions, performances, workshops and lectures both in Norway and abroad.

Haraldur Karlsson has long been working with video media and experimenting with the possibilities of its technical parameters. It uses the latest technology in long-term projects and collaborates with  a number of interdisciplinary experts. Karlsson’s own work is usually presented by Karlsson through an interactive artistic installation or performance  at an exhibition or in a public space, which has become a place of critical reflection on the development and growth of contemporary society. Recently, the author has been interested in medical records of magnetic resonance imaging (MRI) depicting the internal biological organs of the body, as well as data from astronomy or mathematical patterns of natural phenomena. Using digital technologies, the author transforms the exact and  technical data into a poetic testimony with a distinctive choreography revealing their hidden aesthetic quality.

“I could never have had the kind of concentration and focus on the video image I have today. It’s not just because I’ve changed, it’s also because the video has changed itself - it has developed and matured. Only a few years ago there was no room for focus on video information because there was no detail and tools for working with video and detailing as it is today. Working with video is no longer frustrating, hostile. Computers don’t break, programs work and work. I can create an image just like working with digital photography. We are not bound by the traditional picture frame and do not have to adhere to it. Video art is out of the box. Video art has jumped out of its frame and smashed it. I want to explore and marvel at the possibilities of contemporary video art. ”
Haraldur Karlsson, The Video is Out of the Box

Brain is a series of video products derived from personal artistic research on modern scientific discoveries and technological developments. Haraldur have MRI images of my son's brain and with the help of scientific software that can focus on the thickness of the pulp, I have come across an endless (seemingly) opportunity for representations on this remarkable body. I have started a dialogue with researchers from the Norwegian University and have received positive feedback on possible collaboration. The project has, over time, been supported by Visual Artists' Remuneration Fund, Gallery of Iceland and Atopia Center for Video Art and Experimental Film.

The fascination with the (almost) infinite possibilities of this detecting/imaging – the perfection in capturing the smallest of fibres, their thickness, length and shape – led Haraldur to dialogue and collaborate with scientists at the Norwegian University to develop the potential of his art practice. The artist has moved the still images through digital technologies into an audiovisual work in which the exact scientific data, on the one hand very concrete and real, appear at the same time as completely abstract, resembling the living structure of the microcosm. The video consists layers of images and detailed structures in which we penetrate deep into the bowels of the body, specifically the head, the place that controls our physical body, but also houses the mind and the whole elusive realm of thought and imagination. While MRI scans can capture the finest nuances and shades of physical matter, fibers and tissue, they cannot reveal anything about our minds. Haraldur's videos lead us here, into a space of imagination and unexpected poetics; they are a kind of authorial interpretation of the contemporary scientific method. They show that the world around us is best understood neither through the exact scientific method nor through subjective individual imagination, but precisely in the combination of these two seemingly contradictory approaches.

The project was supported by the Artists' Association, the Icelandic Gallery and the Atopia Center for Video Art and Experimental Film. The results of this project have been presented in various exhibitions in Norway, Iceland, Canada and China.

Connectivity from Haraldur Karlsson on Vimeo.