As a resident at the Agosto Foundation and through the support of Vašulka Kitchen Brno, Chris Hill is creating the Learning from the Bees—Navigating a Personal Archive structured around the documentation of a 25 year old personal archive of diverse narrative fragments.

In June through August 2019 Hill expanded her personal archive through field research and interviews with artists and beekeepers. The final project will be a media essay. 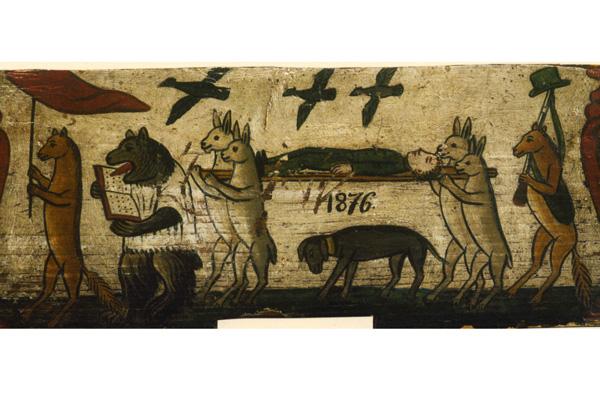 Learning from the Bees integrates documentary elements from a media curator’s personal archive—interviews with artists and beekeepers, postcards (private communications disseminated through public space), illustrations from Czech children’s books that imagine insects as adventurous scientists, documentation from Hill’s beeyard, and other ephemera. The project is focused broadly on issues arising from communications across shifting cultural borders which can introduce cultural or personal difference and discomfort. It will include excerpts of interviews with Czech artists, previously involved with the parallel culture, that were recorded in the mid- 1990s, a period of major cultural and technological change, together with contemporary interviews with some of those same artists.  In the mid-1990s while in the Czech Republic, Hill also became interested in beekeeping, a centuries old practice that requires a negotiation with social insects who communicate with each other to insure the survival of the greater hive body, who produce valuable materials (food, medicine, light) that can be harvested by the beekeeper, and who are often seen by humans as both fascinating and “alien” creatures. Interviews with with Czech beekeepers about their varied practices were also conducted during the summer 2019.

The exercising of this media curator's archive, examined across the distances of time and geography, seeks to articulate a sense of health through cultural practice or culture as health. Working as a media arts curator in the 1980-90s alternative U.S. arts culture (Infermental 7—Buffalo NY, 1988; Surveying the First Decade, 1996) Hill received grant support (mid-90s) to teach in the Czech Republic and research pre-1989 Czech parallel culture. Less than a decade post-November, 1989, questions about communications—what, how, and to whom—were deeply felt subjects for the mid-1990s artists and networking curators.

"During this period I began to think about cross-cultural exchanges as related to the body's immune system that fundamentally has to discriminate between "self" and "other," and then decide whether to deny or eliminate the "other" (infection) or accommodate a useful "other" (microbiome of the gut, pregnancy). Reflecting on my curatorial work with media art histories during radically shifting cultural climates in the U.S. (late 60s, early 70s) and then in central Europe (post 89), I also became interested in the "life" of the media archive—how do documents and the narrative fragments associated with them come to be strategically remembered, re-performed, or forgotten (Living Archives, FCCA, Prague, 2001)."

While working in the Czech Republic in the mid-1990s Hill also became fascinated with the beekeeping shops she stumbled upon in Prague and Brno:

"I didn't understand the intended use of the odd, often homemade items in these shops, but recognized beekeeping as a technology, new and mysterious to me but centuries old, that had evolved for humans to harvest bee products cherished for sweetness, nutrition, light and medicines. Back in the U.S. some years later I started keeping bees, overcame my fear of being stung, and found many parallels between beekeeping, media arts and health. Bees are travelers and communicators. They commonly fly within a 3.5 mile radius of their hive to forage for nectar and pollen...Back at the hive with their sweet resources, they perform a dance for their sister foragers that communicates the distance and direction of their discoveries. An individual bee’s news is danced and then evaluated by small audiences, and further communicated through a decentralized “emergent collective” decision-making process, that guides the entire hive’s daily actions and seasonal survival...The capacity for a community to speak to each other in public—to seek diversity of information and knowledge...is a measure of its public health."

Chris Hill has been involved in the emerging Vasulka Kitchen project in Brno. Hill studied with Woody and Steina Vasulka at SUNY Buffalo in the early 1980s. She taught at FaVU (Brno) in the mid-1990s, and published interviews with individuals involved in Czech parallel culture before 1989 (Walking Trips in Czech Lands, 1996). She has curated an extensive video art and alternative media collection Surveying the First Decade (1996) that has been distributed to museums and universities internationally by the Video Data Bank. Hill currently teaches at CalArts, including a course, Cinema of East Central Europe, that reflects on culturally situated issues. Her recent publications and media work have investigated documentary media on the U.S. incarceration crisis, work of contemporary artist that re-embodies experimental film and grassroots video projects of the early 1970s, tactical media initiatives in response to an educational community emergency, and beekeeping. She is a media curator, artist and educator, and is currently serving as Associate Dean in the Film/Video School at CalArts (Los Angeles).